The Pastoral Loves of Daphnis and Chloe by Longus (1934)
LEC #52/5th Series V. 4 in 1934
Artwork: Illustrated with etchings by Ruth Reeves
Introduced and translated by George Moore
LEC #1173 of 1500. LEC exclusive. 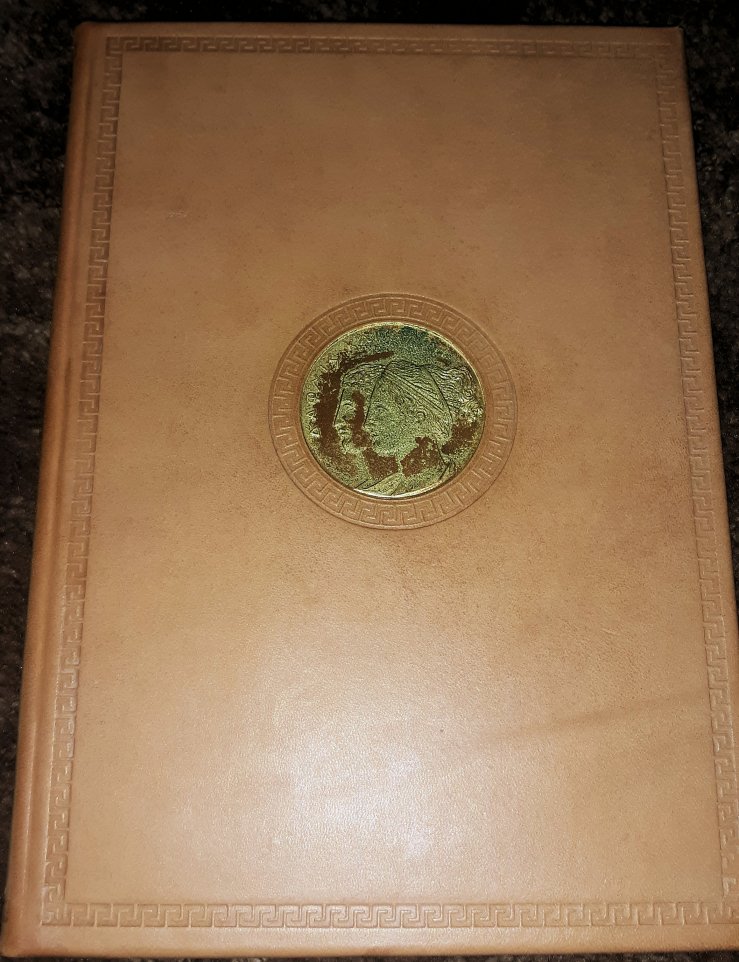 Front Binding – This is a stunning binding; one of the finest and most well executed in the LEC in my opinion. George Macy felt similar, praising the release of The Pastoral Loves of Daphnis and Chloe as “a perfect text, an absolutely perfect translation, unutterably perfect illustrations, an exquisitely perfect type composed and printed with perfect craftsmanship upon a shudderingly perfect paper and cased in a perfectly lovely leather”. While I have yet to read this book, I find his assessment not far off the mark!

But before I go into design notes, let’s reflect upon the work itself. Daphnis and Chloe is a well regarded tale from the Ancient Greek writer Longus — little is known about him, alas — originating from the 2nd century AD (the monthly letter says fourth, but a fair amount of time and research has passed since the 1934 publication of this book). Nothing else is known to come from him, and this is the only time the LEC would print this work. It was never reprinted by the Heritage Press.

Its illustrator, Ruth Reeves, was not so much of an enigma. In fact, she was a leading textile pattern designer in America at the time, as well as an accomplished industrial designer. Reeves decided to toss her hat into the arena of book illustration via the Limited Editions Club’s contest for book illustration in 1932 (possibly the first one!). While her initial submission for Tyl Ulenspiegl did not win (that honor went to Richard Floethe), Macy was taken by her style and asked her if she would be interested in illustrating Daphnis and Chloe. She leaped at the opportunity (Macy indicates that the offer was “right up Reeves Street”), becoming the third woman to illustrate for the Club (following Zhenya Gay and Carlotta Petrina). Reeves promptly created 24 copper etchings that were then faced with steel for the 1500 reproductions to follow, with each needing to be done via hand press and cleaned each time; this translates to 36,000 pulls for the numbered copies alone, not to mention any with initials! This task was expertly handled by Charles Furth, who so happens to have been a LEC member from the beginning, and delivered to book designer and printer Porter Garnett in Pittsburgh. Although Reeves’ etchings were a big success and Macy spends a fair amount of ink praising them, Reeves never returned to do a second commission. She was fairly busy working on The Index of American Design for the Federal Art Project on top of her textile work, so it might just be the opportunity never presented itself for her to return to book illustration. She passed away in 1966.

Design Notes – Garnett, as noted above, as the designer: 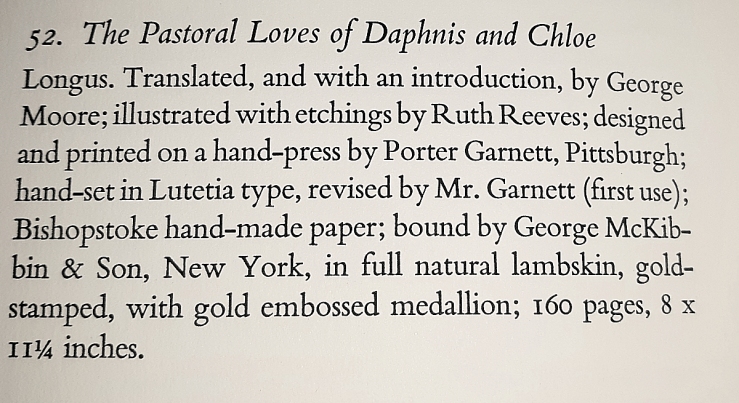 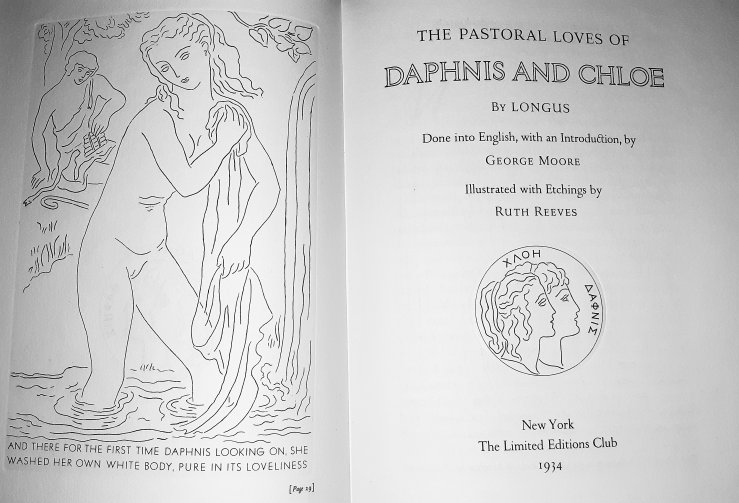 Title Page – Reeves’ etchings really capture the essence of Ancient Greece art; I wish she had the chance to come back to do more for the LEC. The book’s other major contributor was George Moore, who translated the Ancient Greek into English and also provides a rather curious introduction written as a dialogue between him and a “Whittaker”, whoever that might be. 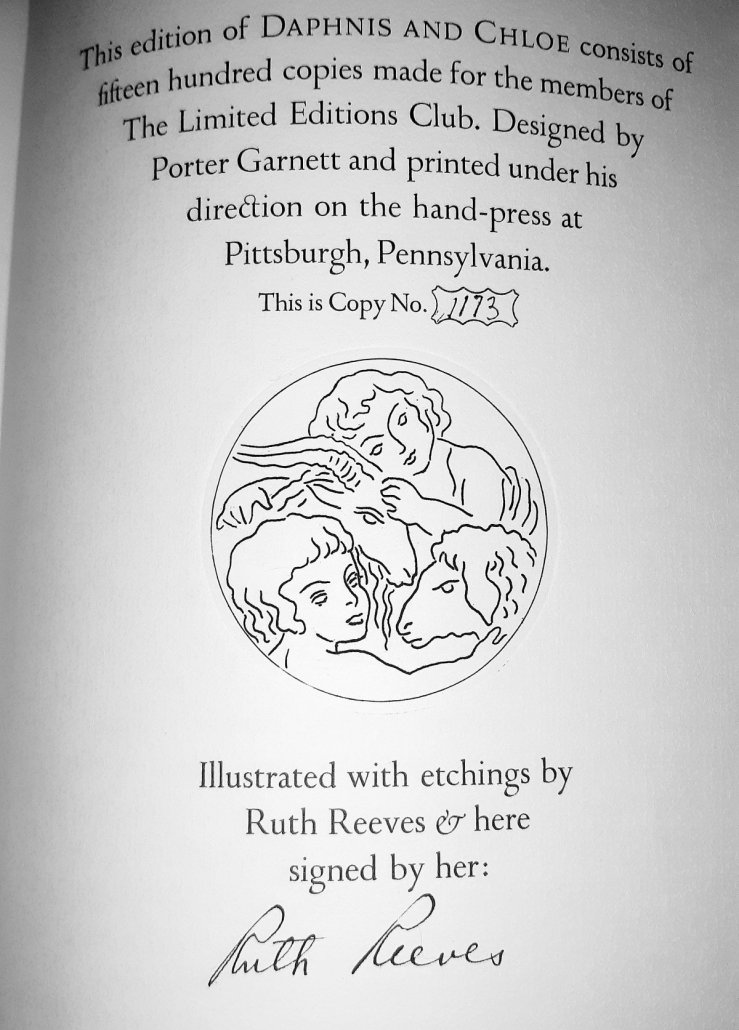 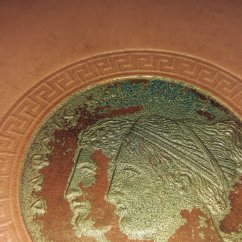 Closeup of the medallion 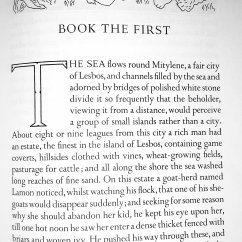 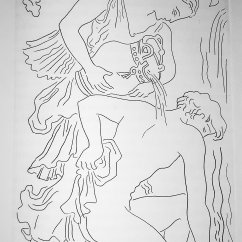 Personal Notes – I bought this from Moe’s earlier this year, and was not disappointed at all. In fact, this has become one of my favorites of all my LECs for its incredible binding and exquisite illustrations surrounded by sharply printed text. I think I can echo Macy’s sentiment that this is indeed the “nearly perfect book”.