The Song of Songs Which is Solomon’s (1935)
Sandglass Number 1KX
Artwork: Illustrated and Illuminated by Valenti Angelo
Heritage Press exclusive. One of the original six titles issued by the Heritage Press; standard and special editions documented here.

Front Binding – Hello again, friends, we’re back after a bit of a break with a look into one of the original six Heritage Press books, The Song of Songs Which is Solomon’s. This was the 2nd book in the 1st series from the newfound Press, and much like Manon Lescaut it was issued as a deluxe signature edition in a limited 1500 copy release. This time, I have the good fortune to be able to show you both editions from 1935 courtesy of Devotee K. Ronnevik, who was kind enough to take photos of the deluxe edition for me. Both editions use the same binding design, but we’ll break them down in more detail momentarily. The Limited Editions Club never printed an edition of this, although those familiar with my post on the “Booklover’s Tour of the World” concept will recognize that George Macy had the intention to print a LEC edition through that series. The plans were scrapped, but at the very least we do have an edition of it through the Heritage Press, and it’s a lovely book to boot!

If you saw my post on the Heritage exclusive printing of Salome, this book mirrors the design of that release (or, perhaps, one could say Salome borrowed it from Songs since it came out first!). It is a gorgeously printed book with yellow pages with a plethora of Valenti Angelo’s delightful linework serving as a frame to the lines from the Songs boxed in with illuminated decorated letters leading off each section. Let’s look at the announcement booklet’s comments on this edition:

The deluxe edition does indeed come in a nice leather, as I have come across it before in my travels but didn’t think it was the actual deluxe edition due to not finding Angelo’s signature in a similar place like Brissaud’s in Manon. I’ll explain that momentarily, but yes, I am still kicking myself about it. The standard issue strips out the leather for a black cloth.

Angelo has his bibliography in our Salome post. He’s popped up a bit lately, but for now I’m officially out of books featuring him again.

Design Notes – Angelo handled the designer duties along with providing the artwork. The font, Lutetia, is a Jan van Krimpen original, and was at the time a modern choice for such an ancient text. It was printed at 18 point for the black ink to really pop with the art surrounding the text box. The Sandglass gets into the illumination process in some detail — for my purposes I will say that the initial set of books took Angelo about a year to do the gold inlays, and since he performed the task for each book, each will differ ever so slightly from the rest. You’ll get to see that below as we compare editions. 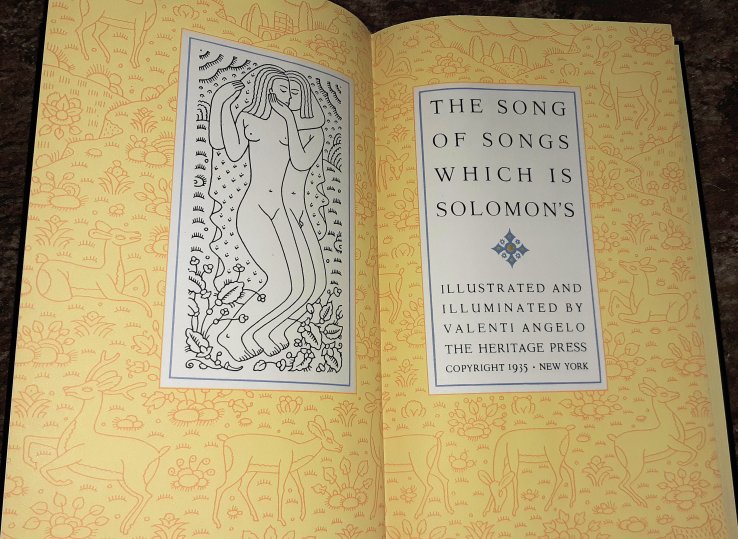 Title Page – The top image is the deluxe edition, while the latter is my regular edition. As you can see, the pages of the deluxe edition are more transparent, due to a Japanese rag paper used for the 1500 that initially came out. Mine is a thin paper as well, but a thicker density than the Japanese rag, for certain. This book lacks any formal introduction, preferring to have Angelo’s talents provide the backdrop for the text.

Colophon – The standard edition has the colophon on the righthand page of the last set of lines from Songs; the deluxe instead inserts another page in between with no text block that serves as the signature page (as you can see Angelo’s signature below). It is also unique artwork, as the flower motif on the page is not replicated anywhere else in the standard edition of the book. 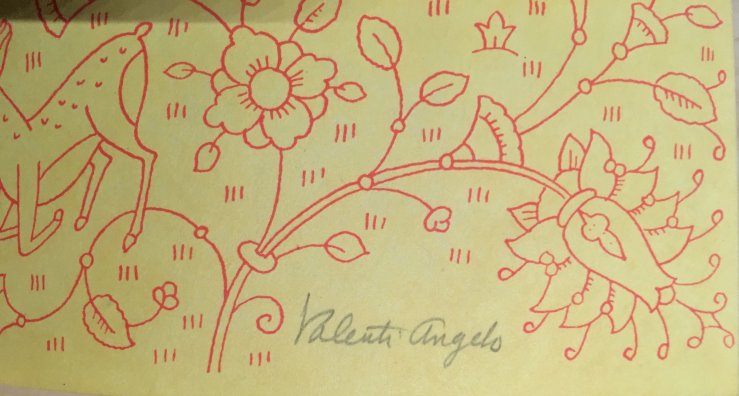 Signature Page – Angelo’s signature in pencil appears at the bottom.

Examples of the Illustrations by Angelo (right click and open in new tab for full size):

Front endpapers (special) – These are just gorgeous. I love this aesthetic so much. 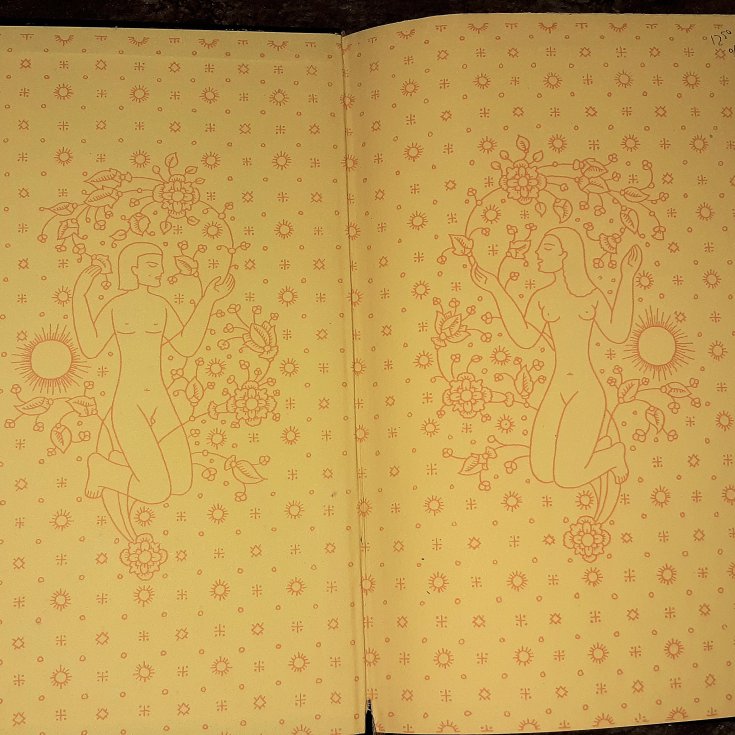 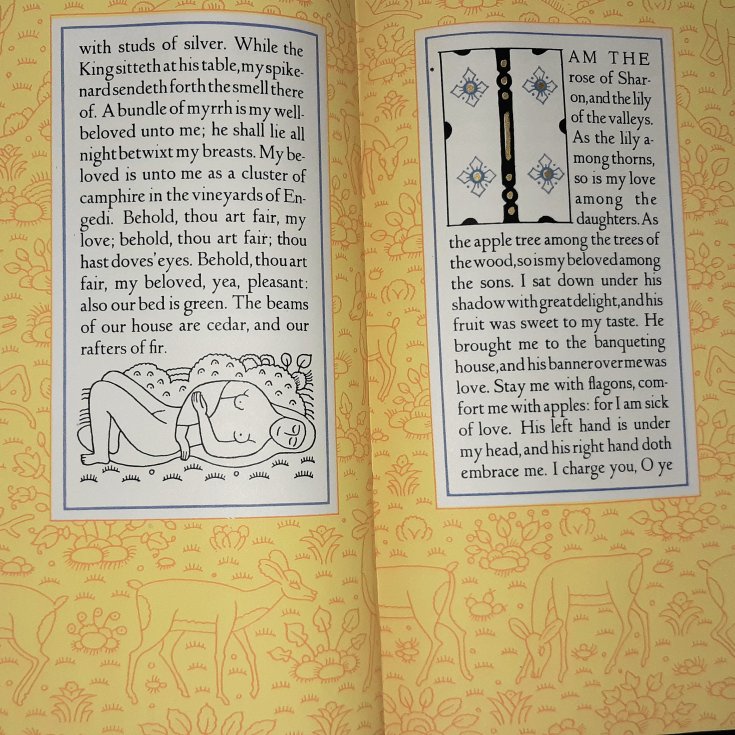 Personal Notes – As I mentioned, I had a copy of what I assume is the deluxe edition in my grasp, but I returned it to the shelf and picked up Zadig on that trip (a lovely book in its own right, and one of my favorite LECs to this day!). Sadly, once I had realized what I had and went back to Monterey to the same shop to try again, it was sold. My loss! I did buy the standard edition from my local shop The Bookstore since it was from 1935 and illuminated by Angelo, but I still am a little bummed I missed out on the deluxe to join my Manon. At least it goes well with my copy of Salome! The Sandglass is not unique to this edition, so it may not be 100% accurate. I got it in a different book altogether, an occasional curio that has happened more than once.

Huge thanks to K. Ronnevik for the pictures of the special edition!