The Decline and Fall of the Roman Empire by Edward Gibbon (1946*, 3 volumes)
Sandglass Number 9JR-10JR-11JR
Artwork: Illustrations from the etchings of Gian Battista Piranesi
Introduction, Index and editing by J.B. Bury. Notes from Edward Gibbon. An additional Letter to the Reader from Philip Guedalla and a Note on Piranesi from Paul McPharlin is also included.
Reprint of LEC #174, 16th Series, V. 12, in 1946 in 7 volumes.

Front Binding – Well, it’s been a long time coming, but we’re finally tackling some of those multi-volume works I’ve had lurking within my collection for the month of December. To kick things off, we’re reviewing the famous history The Decline and Fall of the Roman Empire by Edward Gibbon, issued as a three volume set by the Heritage Press. The LEC broke the text up into seven books, making it perhaps more readable. Regardless, this is a treat to the eyes. Gibbon’s text is accompanied by the reprinted etchings of one Gian Battista Piranesi, and together you have fifty years of Rome research (twenty for Gibbon’s text; thirty for Piranesi’s artwork) neatly compiled into one convenient set. Gibbon nor Piranesi would see another Macy commission, which is understandable. The two were primarily known for their respective works of Rome, and with this issuing, I presume there wasn’t any need to utilize either again. I do like this set, though — the covers are quite classy, and the spine design of crumbling pillars is among the greatest the Heritage Press put out (the LEC used a similar motif, but I think I prefer the HP version of it more). Just a lovely set altogether.

Design Notes – My, there’s a lot of bakers in this book’s metaphorical kitchen! The book was designed by Paul McPharlin. My initial research told me that McPharlin was primarily known as a puppeteer, but he did some book design as a side project of sorts. nicklong at the Devotee boards did a very thorough hunt for information on him, and he was kind enough to allow me to quote him here:

To say that he’s quite the interesting character is an understatement! There’s a book about him in which the LEC Decline & Fall is afforded merely a single sentence (and yet there are pages after pages about all the other books & design work that he did). Without going to the University of New Mexico or accessing his correspondence, the best guess I can venture as to about when this project was begun is all due to circumstantial evidence.

Apparently he had quite a distinguished bibliophile career (cut tragically short by a brain tumor – he died in 1948). There’s a fantastic book on his life, which actually focused more on puppetry than books Paul Mcpharlin And the Puppet Theater. There’s a wealth of data in there that can be found if you use exact searches, but the book and man fascinate me so much that I may have to find the book for myself later on. Throwing all puppetry aside, here’s a brief rundown of what I *just* found in that book:

He was a member of the Typophiles organization.
He designed and illustrated several books – especially for the Peter Pauper Press.
He was drafted in July of 1942, and while in the Army did several “literary” things, including starting a newspaper and such (far too many to list). The Howard book goes on to mention that McPharlin was able to complete several side projects while overseas and that the publication history of several books (mostly Peter Pauper Press books) do not mention or reflect when McPharlin’s work was complete or begun, such as the Peter Pauper’s Rubaiyat of Omar Khayyam. the McPharlin edition. It has no copyright date, and everywhere I look for it – it’s dated as “ca 1940s”. There is an edition printed in 1949 using Vera Bock’s illustrations. The Howard book mentions that McPharlin completed his illustrations for this edition in 1942 but that it wasn’t printed in 1942, and it was implied that it was printed at least a couple of years later.

Due to his reputation as a puppetmaster, I strongly suspect this is why he got involved with George Macy for the 1937 Punch & Judy LEC edition (he wrote the introduction and edited the book). Apparently he kept up a correspondence with Macy that lasted years, but had a stronger relationship with Peter Beilenson of Peter Pauper Press. McPharlin’s New York years (1944-1948) were when he did most of the book work in his life (note that this isn’t “all”, just where the greatest volume was).

I strongly suspect that McPharlin was able to acquire the folio of prints in Italy somehow during his service, or in 1945 during the few months between the war’s end and the Monthly’s Letter’s date (assuming that the 1945 date is not a typo). Yet, either way – this is still superhuman to me. Designing and completing the whole set within a year or starting the layout process during wartime is still an impressive achievement.

He also got the Piransei portfolios utilized for this book’s illustrations, composed the headings (both in terms of their design and their selection; McPharlin used Gibbon’s own notes to comprise the chapter titles), supervised the creation of the endpaper maps (executed by William Meek), and chose the individual etchings for reproduction. Passionate fellow!

As for the book itself, McPharlin chose Granjon as his primary font, with the notes in Granjon Italic. Chapter numbers are in Bodoni. Dr. F.W. Robinson translated Piransei’s titles and captions for the illustrations. The etchings were reproduced by the Photogravure and Color Company of New York. The chapter initials were reproduced from the Nonesuch Press edition of Don Quixote. The Quinn & Boden Company printed and bound this edition, and the paper was supplied by the Chillicothe Paper Company. Macy notes that “three-quarters of a million sheets were required — some 275,000 pounds of paper — an entire trainload!” The spine’s Ionic columns were designed by Clarence P. Hornung. And that’s not even mentioning the text’s intro writers! Macy commented that this was, at the time, “the most herculean labor of our career.” Luckily, the effort paid off in an amazing collection of books! 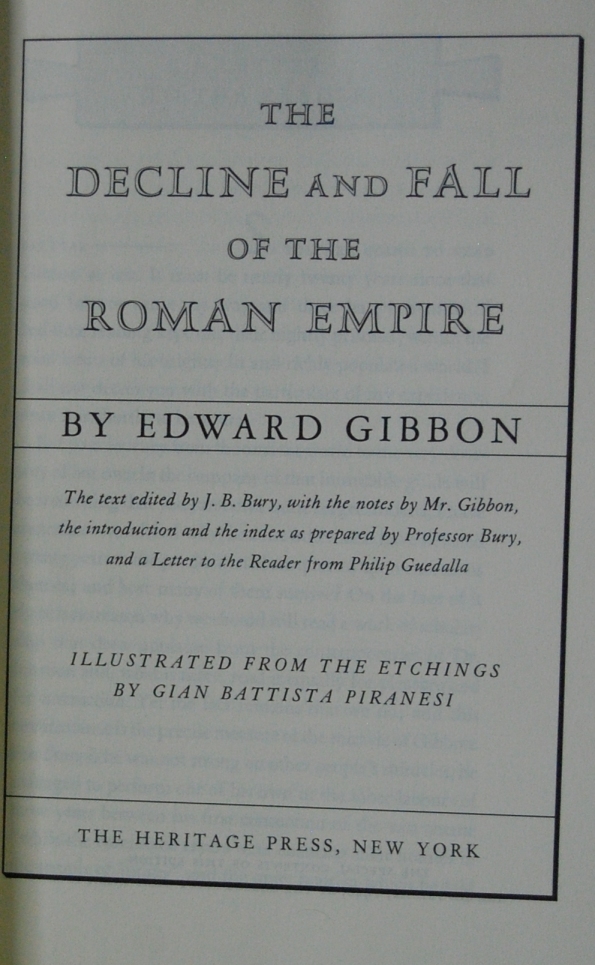 Title Page – This may very well be one of the more diversified releases of the George Macy Company in terms of writing, as well. Three separate introductory texts precede Gibbon’s: the initial intro from editor J.B. Bury (who also indexed the book), a “Letter to the Reader” from Philip Guedalla, and a “Note on Piranesi” supplied by McPharlin (who sadly is uncredited on the title page).

Examples of the Illustrations by Piranesi (right click and open in new tab for full size): 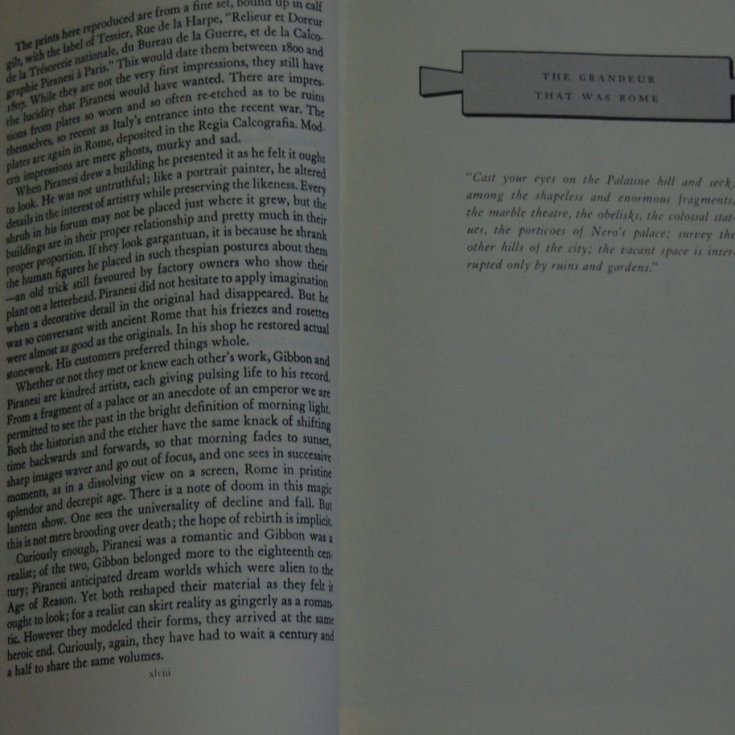 Page xlviii (text) – Each illustration features a little introduction like this one.

Page xlviii (illustration) – Piranesi’s etchings are quite lovely, and all take up two page spreads in the three volumes. Mine has a brownish tinge to them that the camera did not really bring out, alas.

Personal Notes – Gibbon’s work has intrigued me on an intellectual level for some time, so I knew I wanted at minimum the Heritage edition to read someday. This set, which is mostly in good shape save some taxing to the spine (given the mammoth size of each tome, I’m not surprised), came to me through my 50 book purchase from the Oakhurst Library. The LEC set is nice, too, but I think in some ways I prefer the Heritage run. However, I wouldn’t turn down the LEC if I found it at a steal of a price!